Car Repair with a Difference: After 25 years, Alternative Auto Care Continues on a Road Less Traveled

Posted at 21:42h in In The News by Alternative Auto Repair 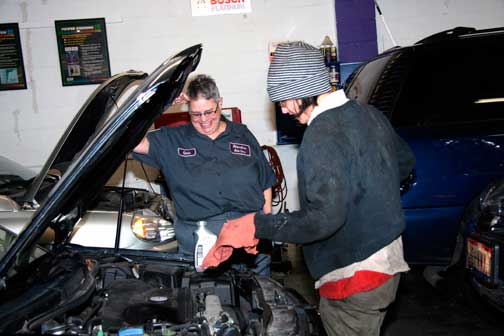 The fact that Alternative Auto Care (AAC) remains “alternative” after 25 years in business reflects how little the car repair industry has changed since Michael Jackson reigned as the King of Pop and the United States invaded Grenada.

The shop, near the corner of Fifth and Hunter Avenues, has remained female owned and operated for a quarter-century of feminist stagnation in which women have continued to make up less than one percent of the nation’s car mechanics.

“This just isn’t a field that women have gone into,” said Chris Cozad, a master certified technician and the owner of AAC. “We’ve done a poor job of recruiting them.”

The industry’s “grease monkey” image, poor customer service, and small-business exclusion from minority hiring incentives have combined to discourage women from pursuing careers under the hood. The neighborhood garage is one place where the glass ceiling has been replaced by a shatterproof windshield.

It’s a shame, said Cozad, because automotive technology offers a rewarding trade to working-class women who may not have the means or inclination for a college education. “The work is very gratifying: If it’s broke, I fix it,” she said. “It’s also very challenging, like trying to solve a puzzle. There is always something new to learn. It’s never boring.”

Even though she is a longtime community activist for gay, lesbian, bisexual and transgender issues, Cozad crashed the good old boys’ club out of necessity more than a pioneering spirit. The 53-year-old Clintonville resident decided to turn her avocation into a vocation when she opened a one-car residential shop “on a whim” near the Ohio State University campus after having been fired as a McDonald’s manager for what she suspects was her sexual orientation.

“At the time, I was just trying to survive,” she said. “I needed a job and I was fed up with working for somebody else. I never thought of this as a lifelong career choice.”

Her experience was strictly grassroots. She learned the trade trying to keep her 1969 AMC Rebel running while a student at Hiram College. Before long, she was working on friends’ cars. “My first location was really on the street,” she said.

Cozad established her first commercial shop in Harrison West, where she operated AAC for more than 20 years until moving in June of 2006 to her new site – a four-car garage and office.

“I love this location,” Cozad said. “I get a lot more neighborhood and drive-by business. The building is more visible, easier to find and it is not full of 20 years’ worth of grease and junk. My landlord remodeled it to suit me. The downsides are that is smaller and does not have a big parking lot.”

They abide by Cozad’s founding principles that strive to reverse the negative public perception of car shops as repositories of dishonesty, pollution and customer complaints. The “alternative” in Alternative Auto Care encompasses more than gender equity.

“Auto mechanics have terrible reputations,” Cozad said. “Surveys have identified them as among the least trusted professionals, along with attorneys. Certainly people do get ripped off, but there is also an awful lot of incompetence. Cars today have up to eight or 10 computer systems on board and some mechanics simply are not up to speed on the technology. It’s not even easy to change your own oil anymore. The profession requires a lot of continuing education.”

Cozad not only receives that education, she gives it as an auto service instructor at Columbus State Community College, where she impresses upon students the need to deliver quality work at a fair price.

It’s a mission readily welcomed by her employers. “We’re just honest with people,” said Harris, who has worked with AAC for nearly five years. “I hate to lie, and I’ve worked at shops where I was required to lie, fixing things that didn’t need fixed.”

The shop engenders trust through communication, a major point of emphasis in Cozad’s college classes. “We don’t teach technicians how to talk to people,” Cozad said. “I really believe there is nothing on a car that can’t be explained.”

Cozad’s communication skills are reflected on the shop’s Web site that provides maintenance tips to prevent expensive repairs, and on the phone, where she recently could be overheard negotiating payment from a customer for a new starter. “I am willing to negotiate with you on that,” Cozad said graciously. “You tell me what kind of a arrangement you need, and I’ll tell you if I can do that.”

Her passion for customer relations has helped Cozad build a loyal consumer base that takes care of its cars. “About the only time we run into a neglected car is with a new customer,” Harris said.

Cozad preaches the gospel of regular maintenance, noting that most cars can last at least 200,000 miles. “Taking good care of a car and following its maintenance schedule are two different things,” Cozad said. “The maintenance schedule is a bare minimum service requirement to keep the warranty intact. The manufacturers don’t want your car to last forever, just seven to eight years on the outside end. I still recommend an oil change every 3,000 miles, although some maintenance schedules push that to 5,000 or even 7,500 miles.”

Despite their unconventional approach, staffers at AAC look every bit the part of mechanics. They wear gray uniforms with their first names embroidered on their shirt pockets. The garage looks like any other in Columbus with its cement floor and metal walls, adorned by pegboard displays of professional certificates.

Appearance begins to deviate from the norm in the garage’s adjacent office, noticeably absent of “beefcake” calendars and other sexist symbols of the profession.

“The environment is much better than 25 years ago when suppliers would drape a picture of a scantily clad woman over anything to sell a car part,” Cozad said. “The girlie magazines are still around but not as prevalent as they used to be. I’d like to think I had something to do with that, because I raised so much hell about it.”

Marketing to men doesn’t make any sense anymore, because women today make 65 percent of automotive decisions, Cozad said. Female drivers initially dominated her customer count, which has been expanded in recent years to include an equal number of men and women. The shop frees men who are not especially car-savvy from machismo posturing, pretending to be well versed in car talk.

“This is a place where men and women feel comfortable,” Cozad said. “Everybody wants good quality, honest care at a fair price, regardless of gender.”

Many regulars express the trust she values when they bring in their cars. “They just toss me the keys and say, ‘fix it,’” Cozad said.

The “alternative” in Alternative Auto Care extends to the environment. While car shops are legally required to recycle oil and batteries, AAC absorbs additional expenses to recycle its metal and cardboard scrap. “We even recycle our plastic lunch containers,” Harris said.

Cozad continues her history of community involvement in the feminist and gay rights movement. She sits on the boards of the Buckeye Region Anti-Violence Organization and Columbus Community Relations Commission and serves as Mayor Michael Coleman’s liaison to the gay and lesbian community.

She drives a 1998 four-cylinder Ford Escort and is outspoken about her distaste for America’s traditional obsession with gas-guzzlers. She calls SUV’s “weapons of mass construction,” but when one rolls into her shop, she sets her political views aside and practices the non-discriminatory policies that have governed her professional and personal life.

What’s she thinking when Ford Explorer settles into one of her bays?

Spoken like a free market capitalist, and there is nothing alternative about that.